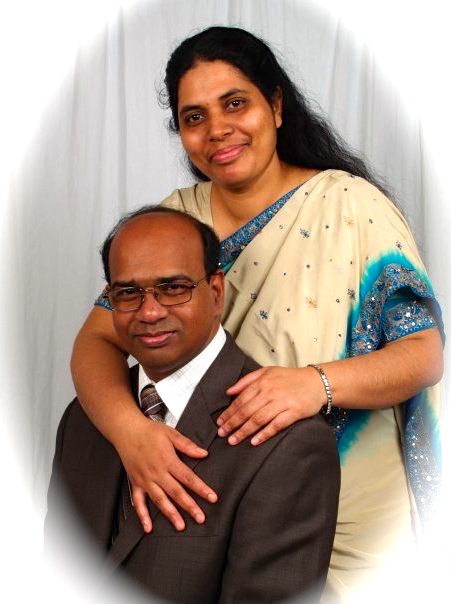 Pastor Karimpanamannil P. Mathew (K. P. Mathew) is a servant of God who has a vision for the healthy growth of the church. He has a strong commitment to teach the Word of God in its purity and entirety. His concern for the qualitative and quantitative dimension of church growth is highly appreciated. He was born in Anicadu, Kerala, India. His father, late Pr. K. P. Philip, an ordained minister of I.P.C since 1960 influenced him much for Christian ministry. Though brought up in a spiritual environment, a Sunday school class became a turning point in his life. At the age of 11, he realized the need of accepting Jesus Christ as the Lord and Savior. Since that time, the joy of salvation was very much in his heart.

God’s call for his ministry was very much confirmed in 1980, the year he passed the 12th grade. He was baptized in water and with the Holy Spirit with special anointing to be a pastor and teacher. He joined Hindustan Bible Institute, Chennai and completed his B.Th in 1984. Immediately, he pursued a B.D program at Leonard Theological College, Jabalpur and earned the degree in April 1985.

Pr. Mathew started his ministry as a teacher at New India Bible College, Paippad in May 1985 and continued his service till January 1989 as registrar of the college. He also served as a pastor and general secretary of New India Bible Church. In 1989, per the special guidance, Pr. Mathew joined Faith Theological Seminary, Manakala as a teacher. In 1992, he completed the M.Th program from F.F.R.R.C, Kottayam, affiliated with the University of Serampore. He continued his work as a faculty member in F.T.S and served as Director of Practical Ministry, Director of Studies and as the faculty secretary in different periods.

Along with the teaching ministry, he was privileged to serve as Pastor of I.P.C Hebron, Venmony (1996-99), I.P.C Carmel Thumpamon Thazham(1999-02) and I.P.C. Kuwait (2003-07). He contributed much as Secretary of I.P.C Kuwait region from 2004 – 2007. He also served as the pastor of I.P.C Hebron Kumbanad (April 2007- September 2008). Pr. Mathew also taught post graduate courses in Hebron Bible College and senior classes in India Bible College, Kumbanad and F.T.S Manakala. He served as the Senior Pastor of IPC Tabernacle Dallas from September 2008 to January 2013. Then, he accepted the invitation and ministered in IPC Bethel Chicago till April 2016.

Pr. Mathew is the author of the section called “Pneumatology (Doctrine of the Holy Spirit)” in Pentecostal Theology published by Readers, Thiruvalla. He also wrote a book, titled Nammude Darshanam (Malayalam), which is published by P.Y.P.A of I.P.C. Kuwait. He writes articles for various magazines and publications. He also preaches in conventions and seminars. He pursues a doctoral program in Intercultural studies at Western Seminary Portland, Oregon.

Pr. Mathew is married to Mini Mathew who is very supportive in ministry and they are blessed with two children. Their son, Philip K. Mathew is currently attending the Texas Tech Pharmacy School and daughter Jithsy Susan Mathew is doing Masters in Louisiana State University.

Pr. K.P Mathew challenges the Pentecostals to become a corrective force in the society and be united for witnessing Christ.